New Email editor for a Sales Funnel platform
Back 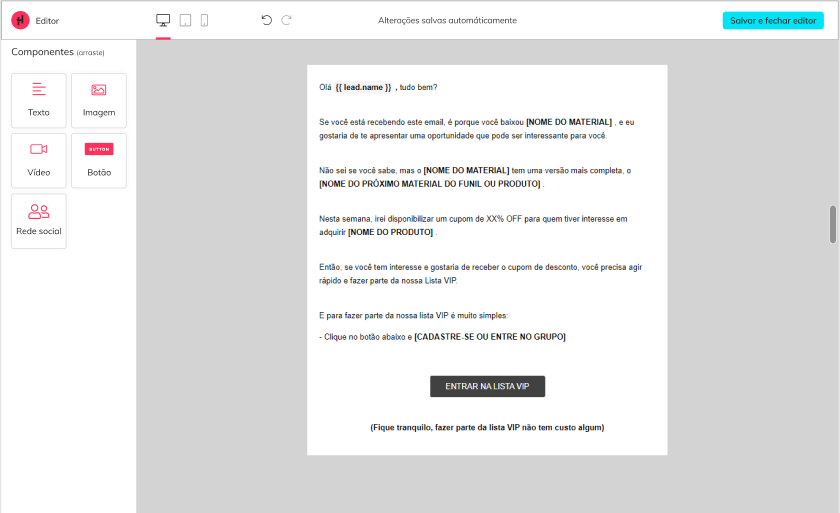 SparkFunnels is a tool that automates every step of a sales funnel strategy. This includes lead capturing, pages and Emails creation and so on. And the automation of professional emails that are capable of converting leads into customers is essential for the results and specially the continuity of users within the application. The context is that the product's Email editor only allowed the creation of Emails that were text-only. This made the application very rigid and prevented users from using visual elements such as images, buttons and links to support their results.

The problem is that the former Email editor was too rigid and, with "hidden" features, hard to find. This made the user make misconfigured emails on the platform. Also, when it comes to email marketing, images and CTA (Call to action) buttons are extremely important for the end user's result. That's because these elements are key in the visual communication and to direct the leads for the purchase itself. Therefore, not being able to add these visual elements plays against the result and continuity of our user on the platform.

The first thing we have done was to make the problem clearer. To do this, we have interviewed several users. We were seeking to understand a little more of the main user barriers and difficulties they were having with the application itself. What was bad, what was good, and so on. To compose the results, we took some time for watching screen recordings through Hotjar and finalized the initial study, clarifying exactly what were the main problems and barriers our user was having with the former editor.

Having the problem clear, we started some benchmarking with similar applications, to understand how our competitors were dealing with the problems, and we started to define our solution. We chose to change the editor, as the editor we had installed in, would not allow the addition of images and other visual elements, besides text. For the decision of the new editor, we got the engineering team, specially to understand hard would it be to install a new editor, and we discussed the possibilities for new editors. We opted for an open source editor, called Grapes.JS, because it was made in javascript, and it had a lot of support from the community, as well as having its open license for commercialization.

Then, we move on to creating the new UI. We have created an initial prototype, which we validated with engineering time (To verify the feasibility of the thought solution) and later we ran some usability tests with internal users, to make sure everything was understandable enough. We then adjusted it according to feedback and updated a new final prototype, which we used for new usability tests, this time with external users. With the tests finished, and based on the final feedback, we create the final UI and started the delivery process.

I’m an entrepreneur passionate about building more effective and lean-...